This article is a stub. You can help 28 Days Later Wiki by expanding it.

The M4 carbine is a family of firearms tracing its lineage back to earlier carbine versions of the M16 rifle, all based on the original AR-15 rifle designed by Eugene Stoner and made by ArmaLite. The M4 is a shorter and lighter variant of the M16A2 assault rifle, with 80% parts commonality.

During the repatriation of London, many soldiers, including rooftop snipers such as Sergeant Doyle, were armed with M4 assault rifles.

Doyle with his M4A1 Carbine.

An M4A1 slung over a soldier's back.

Doyle's M4 rifle beside him on a rooftop.

Doyle aiming his M4 in the streets of District One.

Doyle with his M4 in Regent's Park.

Doyle aiming his M4 at Infected outside Regent's Park. 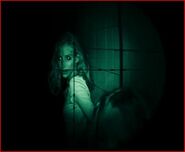 The night vision scope on Doyle's M4.
Add a photo to this gallery
Retrieved from "https://28dayslater.fandom.com/wiki/M4?oldid=8820"
Community content is available under CC-BY-SA unless otherwise noted.